Fish and other critters living in the water need dissolved oxygen (DO) to breathe.

Dissolved oxygen gets into the water of a lake or stream when the wind mixes with air at the water surface or when aquatic plants release it through a process called photosynthesis.

Several factors impact the amount of dissolved oxygen in the water:

If DO drops too low, fish can’t breathe and they die.

Dissolved oxygen in Torch Lake is high throughout the year. There have been no reports of fish kills in Torch Lake.

Minimum DO requirements for Freshwater Fish 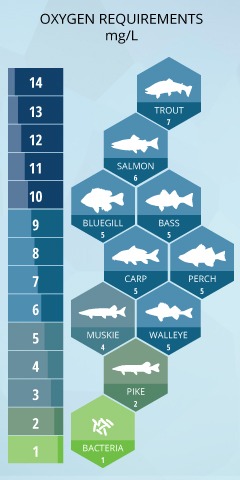 We know you want to enjoy the lake for many years (and generations) to come. So, we’ve put together a list of simple steps you can take to reduce the nutrients, sediments and toxins flowing into the lake and its streams.

Maintain a greenbelt buffer with trees along the shore. Keeping water cool near the shore provides shade, more oxygen and habitat for native species: spawning fish, minnows, and crayfish.