The TCE plume has contaminated 13 trillion gallons of groundwater in Antrim County, MI.

TCE is a known carcinogen and can harm your liver, kidneys, immune system and central nervous system. 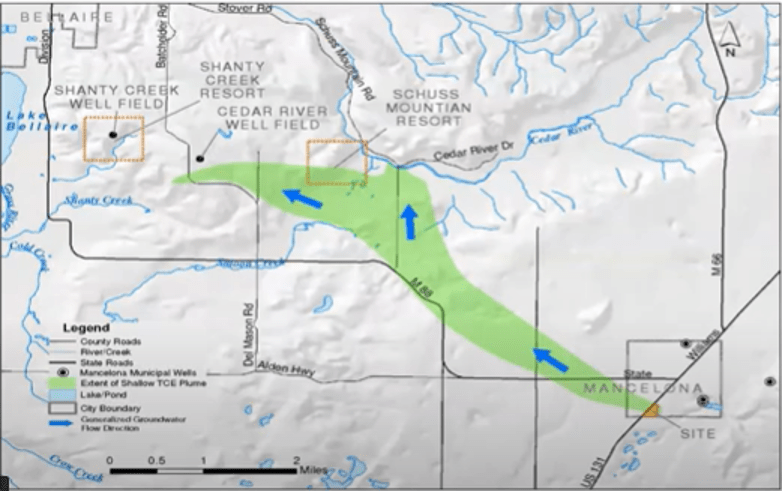 The Story of the TCE Plume

TCE pollutes the groundwater. TCE can pollute the soil and air, too. Where groundwater contacts the soil, TCE vaporizes and migrates through the soil into the foundations of homes, so the vapors can enter basements.

TCE (trichloroethylene) is a manmade degreasing solvent that was dumped in shallow, sandy pits in Mancelona from 1947-1967 at the site of the Wickes Manufacturing plant.

Discovered in 1986, this TCE Plume is the largest TCE plume in the United States.

The TCE plume contaminates groundwater which can contaminate surface water.

Surface Water – The contaminated groundwater plume seeps into the Cedar River. TCE does not remain in the river water very long , because it quickly evaporates into the air, where it is broken down by sunlight.

Water sampling 100 yards downstream from where TCE enters the Cedar River indicates that TCE is not detectable (less than 1ppb).

Groundwater – TCE has contaminated more than 500 drinking water wells along its path from Mancelona to Shanty Creek Resort.

Recent tests of groundwater from wells on the north side of the Cedar River do not contain detectable levels of TCE.

All of the residences with contaminated well water have been connected to the Mancelona Area Water and Sewer Authority (MAWSA). Drinking water is drawn from wells located east of Mancelona and from the Cedar River Well Field near Schuss Mountain.

The State of Michigan has installed special systems at 3 properties near the initial site in Mancelona to mitigate soil vapors from contaminating indoor air.

The EPA has established safe standards for TCE in water and air.

Is the TCE Plume a threat to water in the Torch Lake watershed?

At the February 2022 Public Information Meeting, the TCE Plume was reported to be heading west towards Shanty Creek (the stream). It expands at a rate of 300-400 feet per year and is expected to grow wider.

The plume is not expected to have an impact on the Torch Lake Watershed or contaminate our drinking water wells.

TCE has a greater affinity for air than water, so TCE in surface water quickly evaporates into the air. where it is broken down by sunlight. 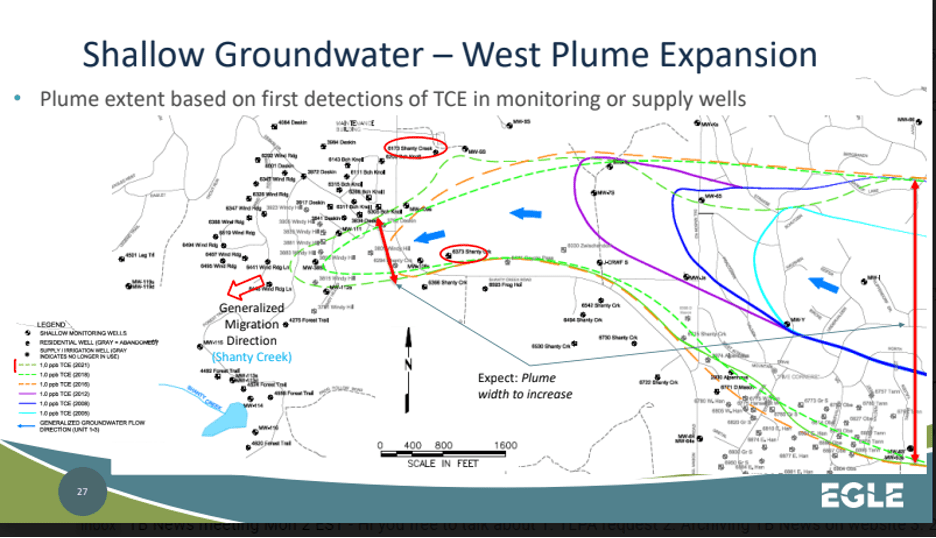 Map of current and past plume boundaries. Image Mi EGLE

Who is managing the TCE Plume?

2001– Local citizens formed a network of community organizations called Antrim County United through Ecology (ACUTE). ACUTE is a group that facilitates discussion of the TCE Plume and related projects to address this contamination.

The State of Michigan made the decision not to clean up the TCE plume, because it would have been too expensive. The cost for cleaning up the estimated 13 trillion gallons of contaminated water would have cost an estimated $650B.
Instead, the State of Michigan agreed to investigate the plume, test wells and provide alternative clean drinking water for residents in the Mancelona, Schuss Mountain and Cedar River Village areas.

2001-2021- The State of Michigan has invested $27 million on monitoring the TCE plume, installing a water system for the Village of Mancelona and extending water lines, installing storage tanks and connecting impacted residences in the Schuss Mountain and Cedar River Village area:

We know you want to enjoy the lake for many years (and generations) to come.

What can you do to show you care?

Keep yourself informed. Torch Conservation Center will continue to update information as it comes available.